Special feature : Spider web carved on Kawari Mokko shape iron Tsuba. Kozuka and Kogai Hitsu hole is big then usual.
Higo Tsuba has been directed by Hosokawa Tadaoki, the one of the seven disciples of Rikyu.
Jingo school is a linage of Shimizu school at Higo domain. The first generation is a nephew of Hirata Hikozou. The signature has been started to engrave from the second generation.
Jingo has a similar characteristic like Rakuyaki as tea utensils such looks like kneaded by hands.
In ancient matters, it is believed that when the spider spun a web at home, the person you were waiting will arrive soon.
There is a old poem (Waka) posted in the oldest chronicles of Japan by Sotoori-Hime.
“The spider is telling that my husband and children are arriving by spinning a web.” 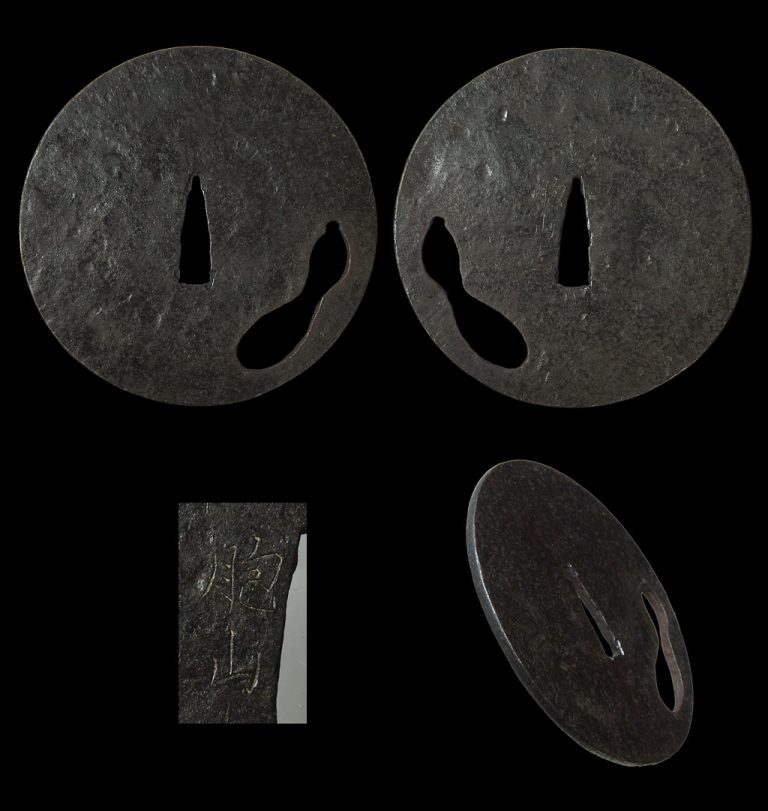 Tsuba: Mei (signature) : Hozan Length : 9.27 cm or 3.64 inches x 9.23 cm or 3.63 inches Jidai(era) :Gendai.(modern times) Special feature: On the large round iron Tsuba, calabash is engraved in openwork. This Tsuba looks like a Tosho Tsuba, but this is modern works. Hozan (Mr. Issei Naruki) is craftsman in Nakatsugawa area…