(We divide 4 sections for each sword as Saijo saku, Jojo saku Jo saku and regular saku)
This sword belongs to Jojo saku ranking.

Special feature : Kanemoto and Kanesada are praised as top two master swordsmiths representing Sue-Seki School.
There are several opinions about Kanemoto’s origin.
He was told as lineage of Akasaka-Senjuin Kuninaga and also influenced by Seki School.
Blades forged by Kanemoto were chosen by many Samurais as Sashiryo because of the sharpness.

And the blade forged by Kanemoto has also been chosen by many Daimyo like Toyotomi Hideyoshi,Takeda Shingen, Kuroda Nagamasa, Maeda Toshimasa and Aoki Kazushige.
The Kenomoto blade that Aoki Kazushige has been used was handed down to Niwa family. This blade has been designate as Juyo Bijutsu at 1939.

NBTHK judged this sword as ‘Magoroku-Kanemoto’ on Tokubetsu-hozon paper. After the ages, ‘Kanemoto’ became to be a school name. So there are so many blades with ‘Kenemoto’ signature.
The blade must have NBTHK paper appraised the blade as ‘Magoroku’ if you try to find the blade forged by Kanemoto the second generation.

Hamon and Jigane of this blade are very similar to the blade exhibited at Atsuta Jingu (shrine) Museum as ‘No.173’, which has been forged by Kanemoto the second generation himself.

It is extremely difficult to find the blade forged by Kanemoto the 2nd generation , ‘Magoroku’ in sword market in Japan now.

Atsuta shrine (Atsuta Jingu) is a Shinto shrine traditionally believed to have been established during the reign of Emperor Keikō (71-130) located in Atsuta-ku, Nagoya, Aichi Prefecture in Japan.
Records of Ancient Matters, ‘Kojiki’ the most old record remaining as the note in Japan, explains that the Atsuta Shrine was originally founded to house the ‘Kusanagi no Tsurugi’, a legendary sword and one of the Three Sacred Treasures of the Imperial family.
So the many swords were dedicated to this shrine.

Some blades are exhibited to the visitors.
#173 Katana : Kanemoto, taht is storaged at Atsuta shrine museum is having many similar characteristics with the blade we introduce in auction this time.

The blade left is #173 Katana : Kanemoto in Atsuta shrine museum. And the right is the blade we have. 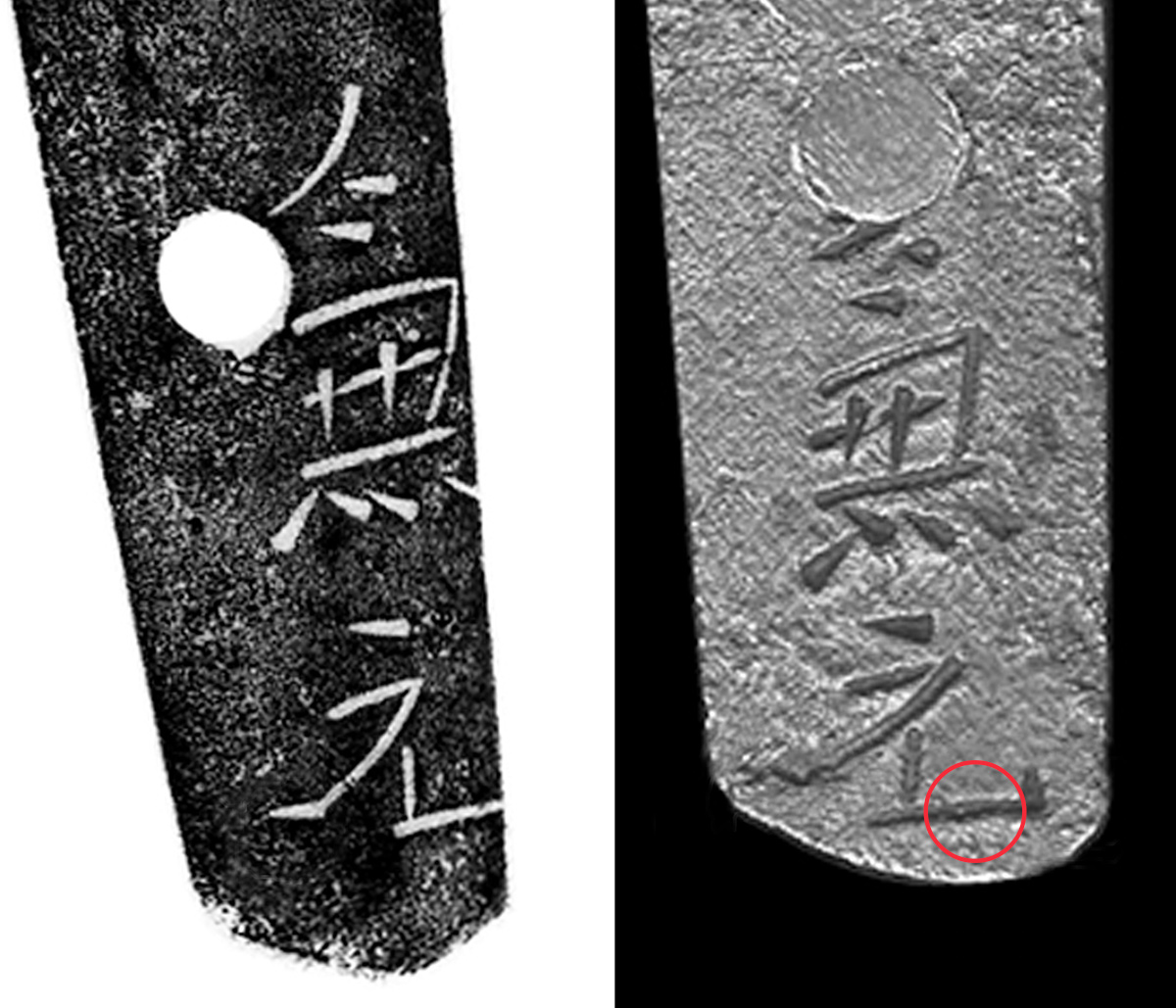 The line goes straight down on ‘元’ character. 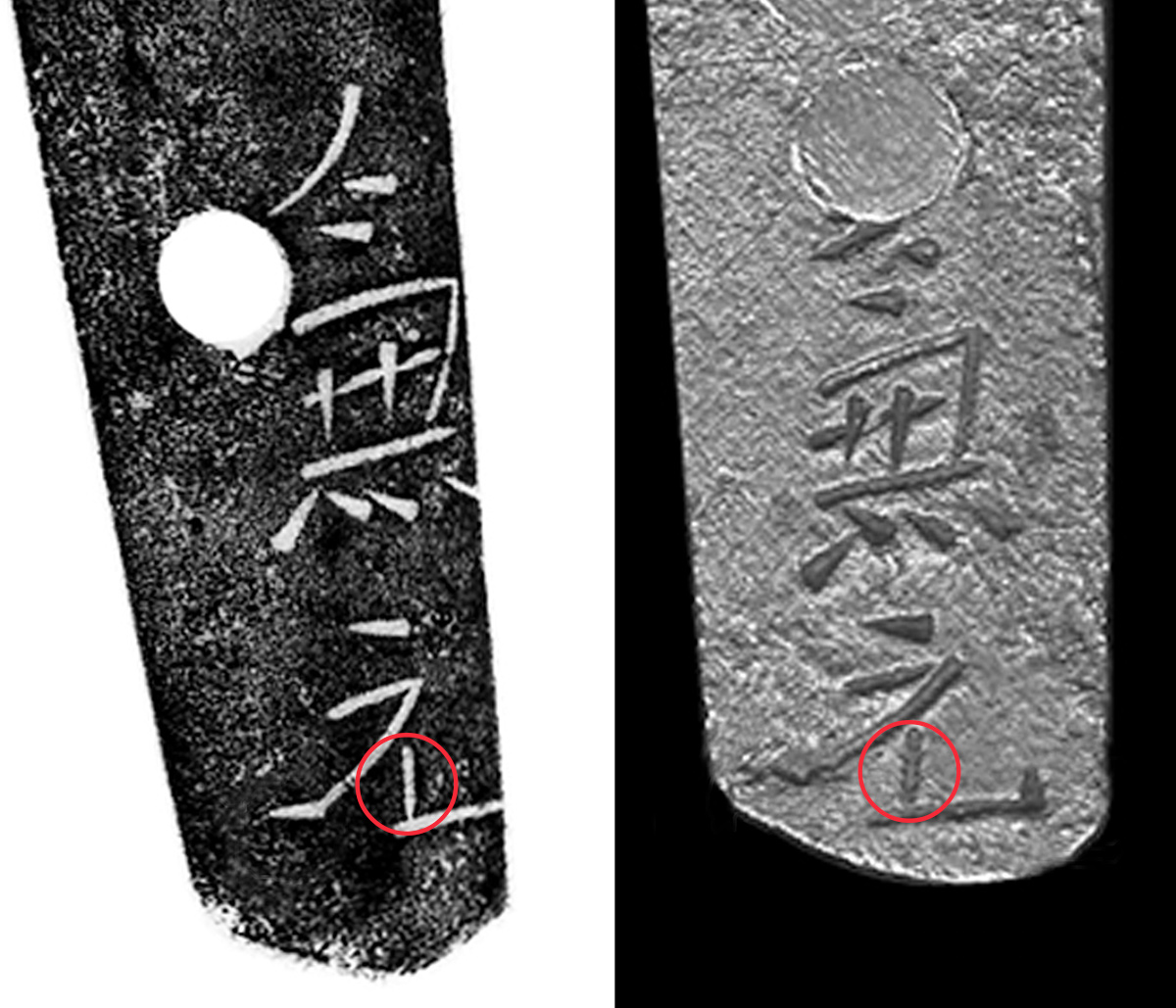 And the horizontal line also go straight, with the point towrd upper side on end. 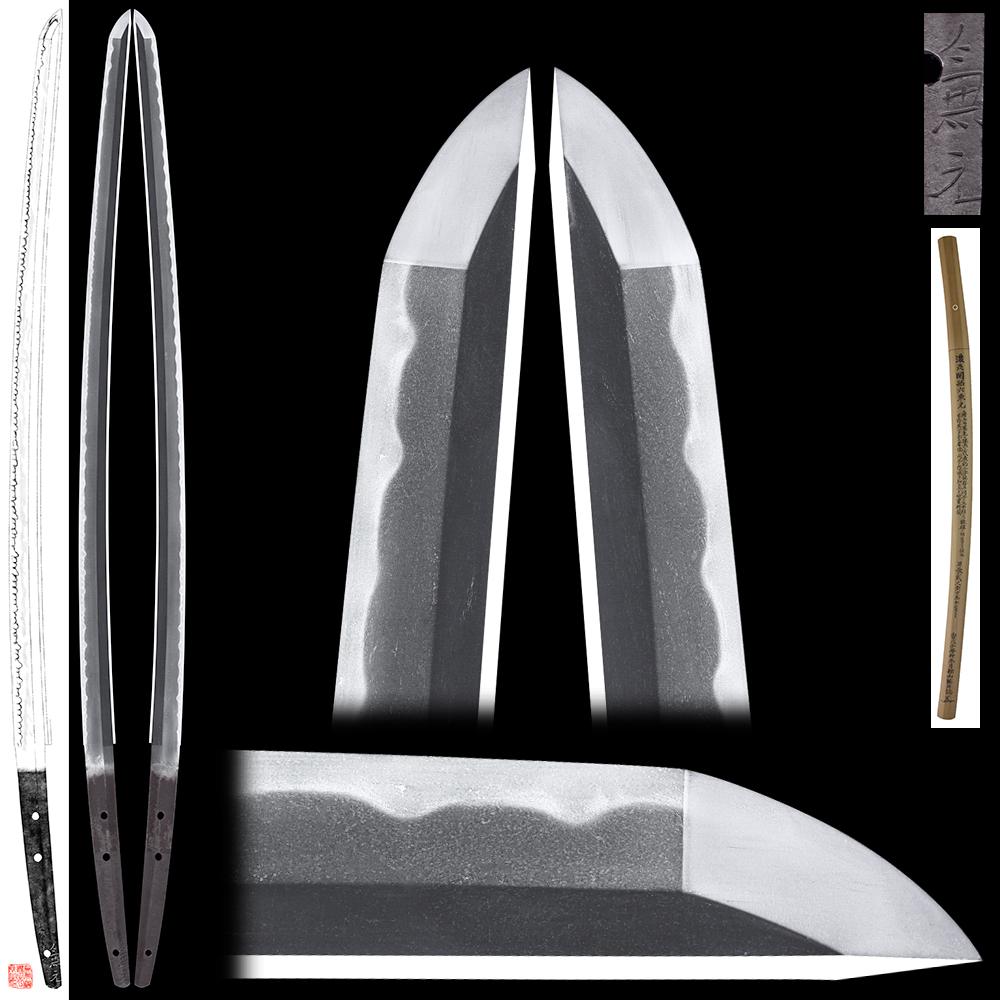 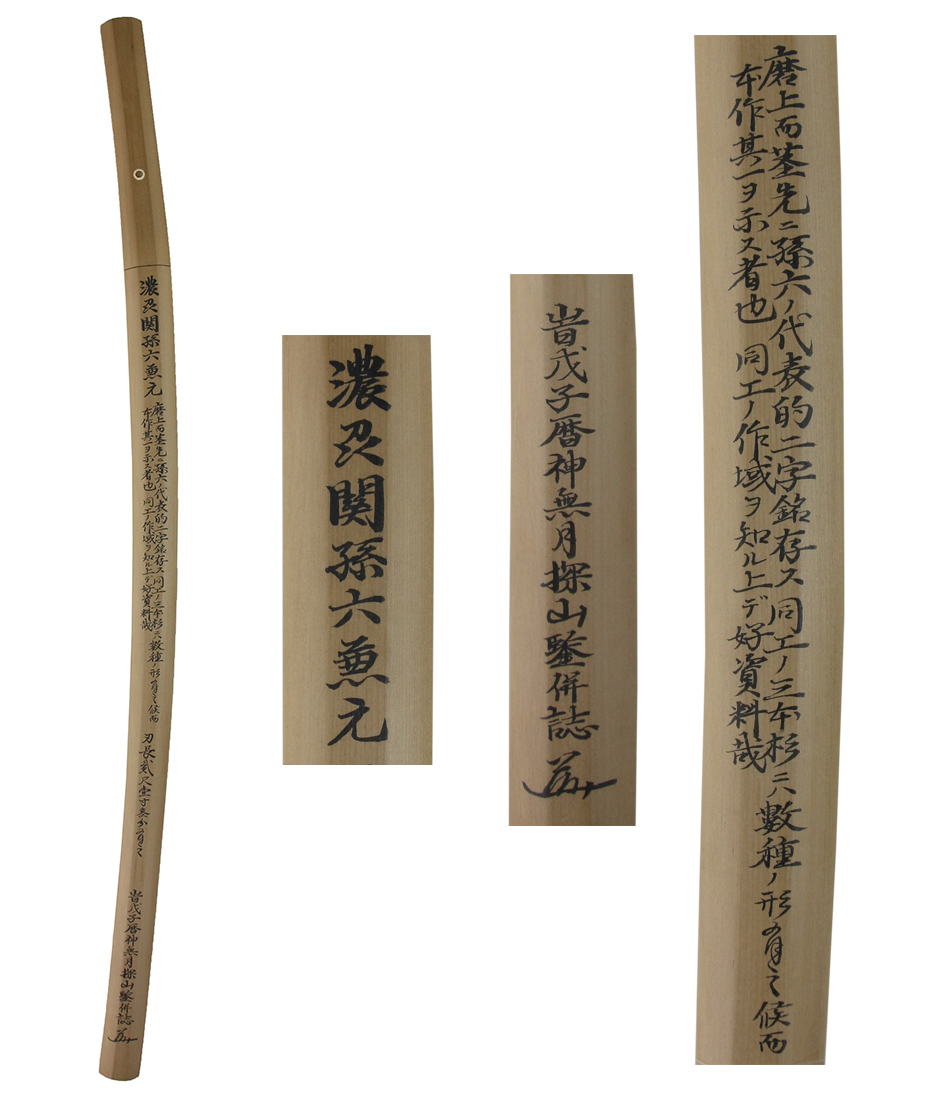 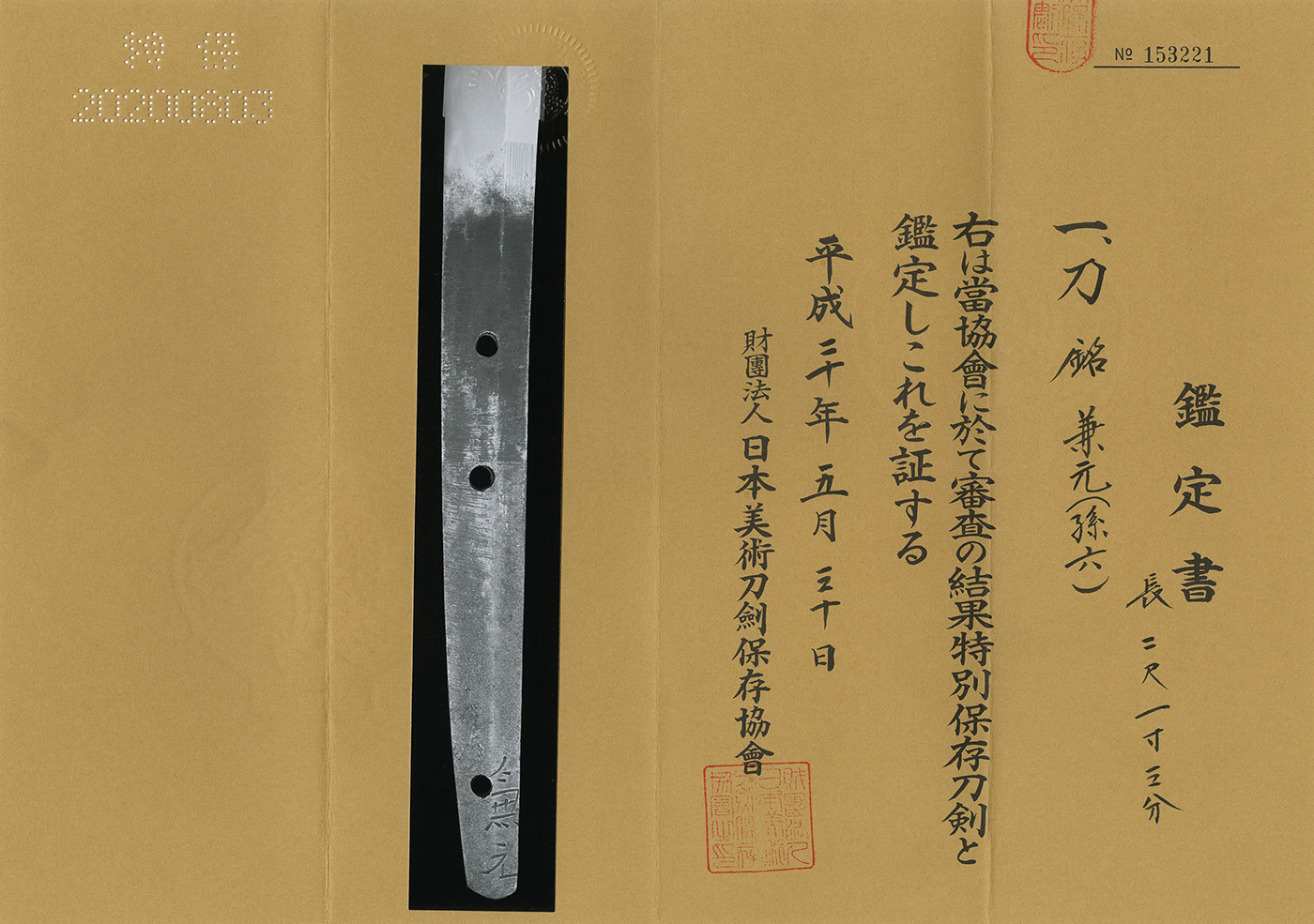