(We divide 4 sections for each sword as Saijyo saku, Jyojyo saku
Jyo saku and regular saku)
This Ichi Hizen Koku Dewa no kami Yukihiro belongs to Jyojyosaku ranking.
The blade was polished.
Blade length : 70.0 cm or 27.55 inches.
Sori : 2.60 cm or 1.02 inches.
Mekugi : 1
Width at the hamachi : 3.03 cm or 1.19 inches.
Width at the Kissaki : 1.95 cm or 0.76 inches.
Kasane : 0.65 cm or 0.25 inches.
Era : Edo period. around Kanbun era.
Shape : It is wide and thick katana with deep sori. It is long kissaki nice shape katana.
Jitetsu : Koitame hada well grained with jinie attached. Chikei work is well seen.
Hamon : It starts as a suguha from the hamachi and gradually becomes gunoe midare with deep nioiguchi.

Special feature : Ichi Hizen koku Dewa no kami Yukihiro is a swordsmith of Hizen
and the signature of Hizen koku Dewa no kami Yukihiro, HIzen koku Dewa no kami Fujiwara Yukihiro.
He was the brother of first generation Kawachi Daijyo Masahiro and has called Hashimoto Kurobee,
In Kanbun 3rd year he received the title of Dewa no kami. It is rare to see
the letter “一 ichi” on the nakago tang as if it is proudly showing that it is Bizenden Ichimonji work.
He actually learned Bizenden skill from Sekido Korekazu but his works were not complete Bizenden
and many has deep nioiguchi with mixture of choji midare.
Many were engraved “以阿蘭陀鍛作 Motte Oranda Kitae Saku”with the
At Tenna 3rd year May, he has passed away at the age of 6.
At the back side of the signature it is engraved Shu Buzen Ogura Jyu Hara gun zamon no jyo Minamoto Yoshikatsu .
The Haragun Zaemon no jyo is unknown signature but it is most likely a well known Busho
at that time who has ordered to make this katana.
The katana is signed same way both the front and back so it is most likely the sword
that was order-made by Yukihiro. It is rare work. 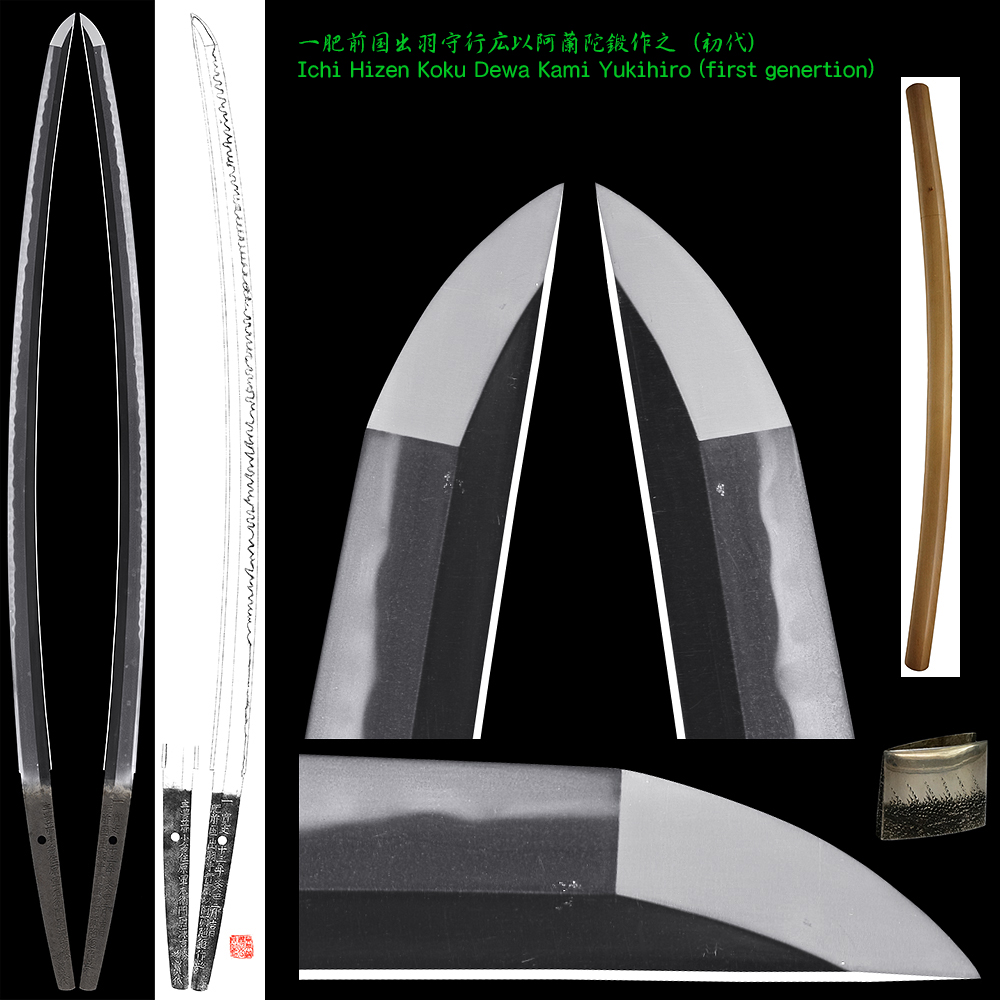 Katana in Shirasaya. Guarantee NBTHK Hozon Token(If the blade doesn’t pass we will buy back 100% of the sales price) Signature : Nagamitsu. (Syowa) (We divide 4 sections for each sword as Saijyo saku, Jyojyo saku Jyo saku and regular saki) This sword belongs to Jyo-jyo saku ranking. The blade was polished by good polisher….