(We divide 4 sections for each sword as Saijyo saku, Jyojyo saku
Jyo saku and regular saku)
This Mumei(Chiyoduru) belongs to regular saku ranking.
The blade was polished.
Blade length : 68.45 cm or 26.94 inches.
Sori : 1.8 cm or 0.70 inches.
Mekugi : 1
Width at the hamachi : 3.12cm or 1.22 inches.
Width at the Kissaki : 1.92 cm or 0.75 inches.
Kasane : 0.62 cm or 0.24 inches.
Era : Late Nanbokucho period to early Muromachi period .
Shape : It is Osuriage mumei work with bohi engraved on both the front and back.
It is wide and thick O-kissaki sword.
Jitetsu : Koitame hada well grained with jinie attached There is faint utsuri appearing.
There is Ohada appearing around the habaki area. The hada is O-hada but it is not disturbing.
Hamon : Konie deki deep nioiguchi starting in Suguha style.
There is long gunome midare with much ups and down in the ha.

Special feature : The name Chiyozuru comes from the childhood name
of Kuniyasu who is the founder of Echizen Rai.
First generation Kuniyasu has descended from first generation Kuniyasu.
He has moved to Echizen which is now in Fukui Prefecture.
There is only few Zaimei works such as two generation(parent and son)
Kuniyasu, Morishige, Morihiro and others.
There is also Shigekuni and Kuniyuki in same generation.
Chiyoduru was popular for marriage and celebration from the auspicious name.
There are four generation for Chiyoduru Morihiro.
The first generation was said to be the son of Rai Kuniyasu
of Nanbokucho Period circa Bunwa(1352-) followed by second generation
( Late Nanbokucho Period Circa Shitoku 1384), third generation(Muromachi Period Circa Ouei
(1394) and fourth generation (Muromachi Period Kakitsu 1441-).
From the shape it is late Nanbokucho period to early Muromachi period work.
There is some minor flaws that is not serious. It is work that has passed many years.
It is work of Rai school. 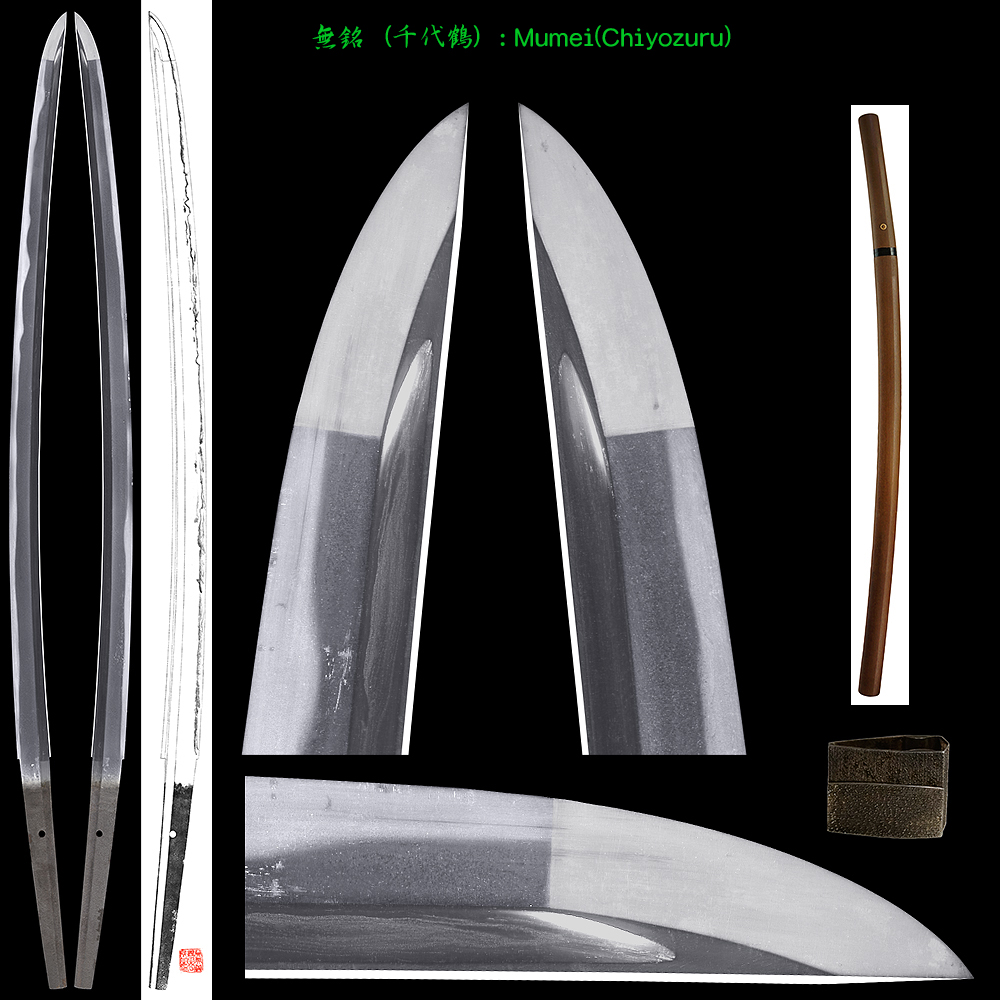